During the Tunnel to Towers 2022 Season of Hope,  we are giving away dozens of homes through New Year’s Eve.

That’s dozens and dozens of homes in just a few weeks! But accomplishing this for America’s heroes and their families wouldn’t be possible without the generous support of caring friends like you. People who understand what these heroic, self-sacrificing men and women gave and why they deserve every ounce of support we can give them. 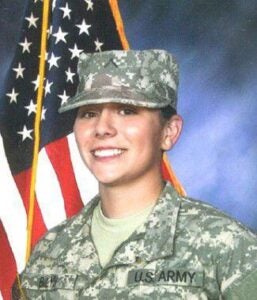 In October 2015, at the age of 25, Maggie joined the U.S. Army and was stationed at Fort Hood, Texas for basic training prior to her deployment to Bagram, Afghanistan later that year.

In early 2016, only a couple of months into her deployment as part of Operation Freedom Sentinel, Maggie was struck by a suicide bomber, leaving her critically injured, and killing two American soldiers and two American contractors. Maggie sustained multiple shrapnel wounds to her chest and torso, a broken leg, and numerous internal injuries as a result of the blast.

On November 12, 2016, after returning to the U.S. for care, Maggie underwent numerous treatments resulting in the loss of part of her small and large intestine, part of her colon, a splenectomy, repairing a split in her diaphragm, and lost a portion of her left breast. Maggie went on to lose her left leg below the knee as a result of the injuries sustained during the attack. She has also been diagnosed with TBI, loss of hearing, and tinnitus.

The Tunnel to Towers Foundation is building a mortgage-free smart home for Maggie and her wife, Mia, in Texas that will be move-in ready in December. Maggie’s smart home will allow her to continue to receive medical care while she gets back to the outdoor hobbies that bring her comfort and joy.

Maggie’s smart home will feature a number of accessible features including automated doors and lighting, wider halls and doorways, special showers to accommodate wheelchairs, automatic door openers, cabinets, counters and stove tops that can be raised and lowered, back-up generators and central heating and air conditioning systems that can be controlled by tablets.

With your help, the homes we give away during our Season of Hope campaign will span our: Fallen First Responder Home Program; Smart Home Program; Gold Star Family Home Program.

For the Bilyeu family, and for so many other deserving families and veterans across the country, supporters like YOU can make all the difference this holiday season for just $11 a month.