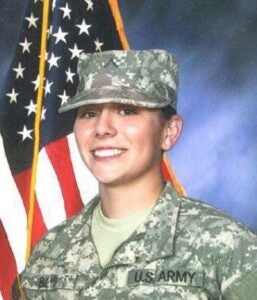 SPC Bilyeu was born and raised in Owaneco, Illinois. In 2015, at the age of 25, she followed in the footsteps of both her grandfathers by joining the U.S. Army. She was stationed at Fort Hood for basic training prior to her deployment to Bagram, Afghanistan, later that year.

In early 2016, just a few months into her deployment as part of Operation Freedom Sentinel, SPC Bilyeu was struck by a suicide bomber. She sustained multiple shrapnel wounds to her chest and torso, a broken leg, and numerous internal injuries as a result of the blast. Two American soldiers and two American contractors were killed in the incident.

Since then, Maggie has been working hard at her rehabilitation. She enjoys the simple pleasures in life, such as fishing, hunting, and kayaking.

A procession of local Patriot Guard motorcycle riders and vehicles from Travis County Emergency Services District 1 escort SPC Bilyeu and her wife Mia to their new home. Following the dedication ceremony, SPC Bilyeu raises an American flag and participates in a ribbon cutting outside of the home, before seeing the interior for the first time.

The smart home is completely accessible, with automatic doors, wider hallways, and oversized doorways. The kitchen cabinet shelving is designed to enable easy access to plates, cups, and bowls, and a mechanized lift allows the stove to be raised and lowered to wheelchair height. Every feature of the home, including the lights, thermostat, and security system, can be controlled via an app on a smart device or via touch screens built into the home.

The Tunnel to Towers Foundation is dedicated to honoring the sacrifice of FDNY Firefighter Stephen Siller, who laid down his life to save others on September 11, 2001. For more than 20 years, the Foundation has supported our nation’s first responders, veterans, and their families by providing these heroes and the families they leave behind with mortgage-free homes. For more about the Tunnel to Towers Foundation and its commitment to DO GOOD, please visit T2T.org.

The Home Depot Foundation works to improve the homes and lives of U.S. veterans, support communities impacted by natural disasters and train skilled tradespeople to fill the labor gap. Since 2011, the Foundation has invested more than $400 million in veteran causes and improved more than 50,000 veteran homes and facilities. The Foundation has pledged to invest half of a billion dollars in veteran causes by 2025 and $50 million in training the next generation of skilled tradespeople through the Path to Pro program.