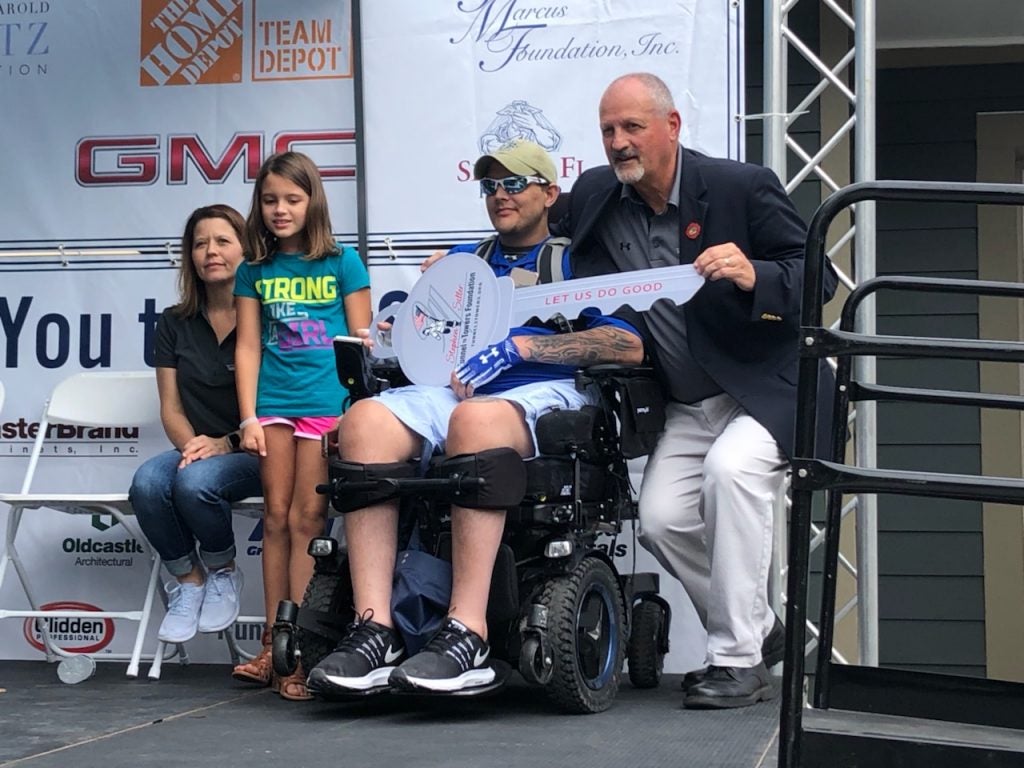 “Anthony is an American hero. He was an incredible friend to my husband; a brave, selfless Green Beret. He will forever be a Green Beret,” said Nancy Gass, widow of Green Beret SSGT Girard “Jerry” Gass and the first Tunnel to Towers Gold Star Family Home Program recipient. “I am so grateful to attend this ceremony, which honors his service and reflects America’s commitment to honor and take care of those who serve and sacrifice for us,” she continued.

In June, 2014, SFC Kenworthy suffered a C-6 spinal cord injury when his vehicle was hit by an IED in Afghanistan, causing it to roll over and pin him under the turret. Kenworthy remembered it was SSGT Gass who lifted the turret off him and helped save his life. Jerry would lose his life on the battlefield just two weeks later. Yesterday, his wife Nancy represented his valor and resilience at SFC Kenworthy’s homecoming.

“Tunnel to Towers has now pulled Anthony and me into another family – their family. They have taken care of us like one of their own. This is a dream come true,” said Nancy.

The gift of a smart home will help Kenworthy reclaim his independence with with wide hallways and doorways so he can move freely through the home in his wheelchair and a ceiling track lift that can help move him from room to room.

“I didn’t do anything special. I just got hurt for it. I made it home, but one of my buddies didn’t. Jerry didn’t. When I found out they were giving Nancy a home, I was very excited because the wives and children deserve it so much more than I do,” said SFC Kenworthy.

“For a soldier who served seven combat deployments and one foreign defense tour during his nearly two-decade-long military career, this home is the least we can do to repay his service and sacrifice to this great country,” said Frank Siller, Chairman and CEO of the Tunnel to Towers Foundation.

To help build homes just like SFC Kenworthy’s, please consider an $11 per month pledge – you can make a difference in the lives of America’s First Responders and military heroes.