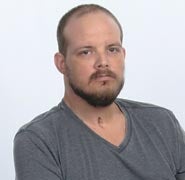 In July of 2014, Army SFC Anthony Kenworthy was returning from a night mission when his vehicle hit an IED in Afghanistan.

The truck rolled and he was thrown from the vehicle and pinned under the turret.

His fellow Green Berets were able to lift the gun off of him and save his life but he suffered a C-6 spinal cord injury that left him a quadriplegic.