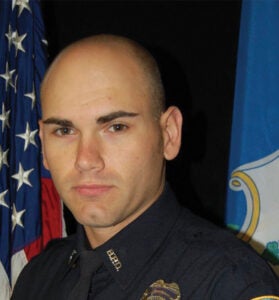 Oct. 14, 2022 – The Tunnel to Towers Foundation announced it is immediately taking on the mortgage held on the home of Bristol, Connecticut Police Sergeant Dustin Demonte.

Sergeant Demonte, 35, was one of two officers killed on Wednesday night in an apparent ambush attack.

He was a 10-year veteran of the force and leaves behind his pregnant wife, Laura, and their two young children.

At least a dozen first responders have been shot this week alone, according to the National Fraternal Order of Police.

“These cowardly acts of violence targeting our first responders have to stop. Instead of preparing to celebrate the birth of their third child, the Demonte family is now facing a future without their husband and father. Two children will grow up with only memories, while their youngest sibling was robbed of the opportunity to be held by their dad. I spoke with the family today, and assured them they will be able to stay in the home where they have made so many memories,” said Tunnel to Towers Chairman and CEO Frank Siller.

The Tunnel to Towers Fallen First Responder Home Program pays off mortgages for the families of law enforcement officers and firefighters who are killed in the line of duty and leave behind young children.