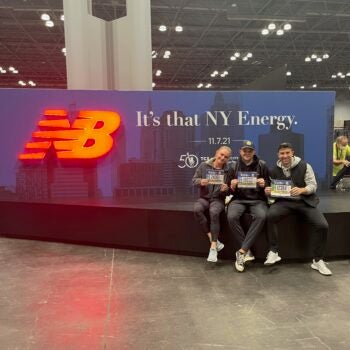 Megan Coll, Edward Coll, and Henry Coll are three cousins that will be running in the 2021 TCS New York City Marathon on Sunday, November 7th, 2021 in memory of Robert Coll— a loving father to his daughter Megan and fun-loving uncle to Edward and Henry, who was killed in the terrorist attacks on September 11, 2001. Robert’s daughter and two nephews formed “Team Woody” for the marathon, which is Robert’s nickname given to him by his colleagues he worked with at the One World Trade Center. They are running and fundraising on behalf of the Tunnel to Towers Foundation— the preeminent 9/11 charity organization that was founded to honor the sacrifice of Fire Department of New York City (FDNY) Firefighter Stephen Siller, who gave his life while saving others on 9/11.

Robert Coll worked as a stock broker on the 81st floor of the South Tower. On September 11, 2001, he was last seen on the 80th floor of the building rendering aid to a woman who was in respiratory distress. Robert, along with a close friend and colleague, gave up their lives trying to save this woman who needed help and, sadly, they all perished that day.

Megan was only two years old when she lost her father on 9/11, and she had to learn about who her father was through the stories of his friends and family; Robert was described to her as a man who was caring, fun-loving, the life of the party, and a person who was always willing to lend a hand to those who needed him. Henry and Edward, Robert’s nephews, described their heroic uncle as a “jokester” and the “light of the family”.“Losing our uncle was truly a tragic loss to our family”, they said. Robert came from a family of nine, and was one of two boys.

Megan, Edward, and Henry have participated in the annual Tunnel to Towers New York City 5K Run & Walk several times in the past, and they have been familiar with the Foundation’s mission for a while. This year, they banded together and decided that they would to fundraise for a charity dedicated to ensuring America never forgets the great tragedy of the attacks on September 11, 2001— America’s Darkest Day. These three cousins are an active trio, and the three of them exercise regularly. Participating in this year’s marathon has a deeper meaning for them: they are commemorating the hallmark year of the 20th anniversary of the September 11 attacks, as well the 50th anniversary of the TCS New York City Marathon, and running in memory of Robert Coll makes this a momentous event for them.

All three cousins plan to stay involved with the Tunnel to Towers Foundation, and they are looking forward to participating in future events.