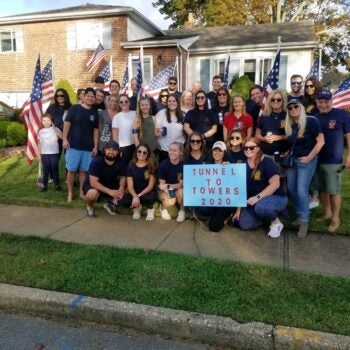 On September 26, 2020, sisters Meghan and Colleen Reedy and their mother, Patty Reedy participated in the Tunnel to Towers Foundation’s Never Forget Virtual Challenge. The Foundation’s signature, in-person 5KRun & Walk NYC was canceled due to citywide COVID-19 restrictions. The event retraces the final footsteps that Fire Department of New York City (FDNY) Firefighter Stephen Siller took on September 11, 2001, when he ran from Brooklyn, N.Y. through the Hugh L. Carey Tunnel to Ground Zero, where he gave his life while saving others. As their virtual challenge, the Reedy family planned a 5K of their own and ran in memory of their late father and husband, NYPD Detective Mike Reedy, who passed away in the summer of 2019.
Detective Mike Reedy was the embodiment of service and he dedicated most of his life to being of service to others; he enlisted in the U.S. Army to protect and service our great nation, which was then followed by a 25-year career in the New York City Police Department (NYPD). Detective Reedy then went on to work with the Manhattan DA’s Office for another 18 years. Meghan and Colleen’s parents, Mike and Patty, instilled into them the importance of serving their community.
Above all, Detective Reedy had a passion for music; he served as the Senior Drum Sergeant in the NYPD’s Emerald Society Pipes and Drums band for nearly 30 years. Throughout Detective Reedy’s career, music could always be heard playing in the background while he worked.
When the Reedy family lost their patriarch, Meghan Reedy immediately knew the best way to keep her father’s memory alive.“After we lost my dad I thought ‘how can we pay his duty of service forward?’” Meghan shared,“Doing good in his name was what he would have wanted. It was a humbling experience to be running with my family, extended family and friends.” She decided the best way to keep her father’s legacy alive was through participating in Tunnel to Towers’ Virtual Run & Walk 5Kv NYC; the Reedy women created the NYPD Detective Reedy’s Squad to run in the 5K for the very first time.
The Reedy Family initially planned to participate in the Foundation’s in-person event, but COVID-19 changed the world, as well as their plans. “I held out hope that it would still happen, but once the [New York City] Marathon was canceled, I knew it wouldn’t happen,” Meghan Reedy said. “The world is so stressed right now, but if you can do one good thing, one small thing, it makes the situation feel more doable…it’s scary right now, but it’s going to get better.”
The Reedy team raised more than $4,000 for Tunnel to Towers through Fund The First, a crowdfunding site dedicated to fundraisers for first responders and their families, by participating in the event.
On the day they planned to run, the Reedy Family decked out their front lawn with dozens of American flags provided by the Massapequa Kiwanis Club, as well as shamrocks to pay homage to their Irish heritage. Members of the NYPD Pipes and Drums band played for the Reedy family in front of their home at the start of the 5K. The Reedy women took solace in hearing the sound of bagpipes and their dad’s drum echoing through the streets.
“We incorporated everything my dad loved or participated in and it was an amazing experience,” said Meghan. “My dad would have been so proud of my family and of everyone who participated––even the people who drove by beeping their horns, and those who came up to ask why we were running.”