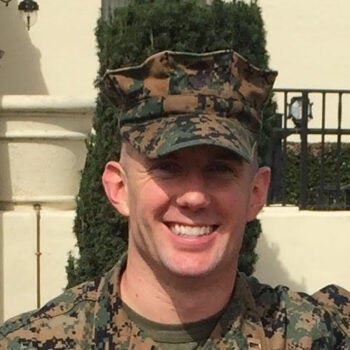 Michael has always had a passion for service instilled into him by his father who served as a Police Officer in the Chicago Police Department for 30 years. Michael was a young child in the 5th grade on September 11, 2001, and he remembers the profound effect the attacks on America had on his community, where nightly candlelight vigils were held, and on the rest of the country. The attacks on America that day, one of the darkest days in our country’s history, served as the catalyst that led Michael to enlist in the military to serve and protect the citizens of our great nation. In the 11th grade, a Marine Corps recruiter visited his high school and inspired him to sign up in the military. Larson first joined the U.S. Navy and then he was commissioned in the Marine Corps for 7 years.

While stationed in California, Michael saw a commercial about Tunnel to Towers and decided that he wanted to donate and support the Foundation’s programs. It was then that he discovered the Foundation’s Young Professionals Network and learned that he could get more involved with the Foundation through it. He became part of the network in 2020.

During the COVID-19 pandemic in 2020, Michael assisted Tunnel to Towers in feeding the thousands of National Guardsmen who were at the United States Capitol; the servicemembers in the National Guard were incredibly grateful to Michael Larson and the rest of the Tunnel to Towers team for providing hot meals while they were there. Michael is excited to continue to be a part of the Young Professionals Network as one of the Foundation’s amazing and dedicated volunteers, and he is looking forward to running in the Tunnel to Towers 5K Run & Walk NYC on September 26, 2021.