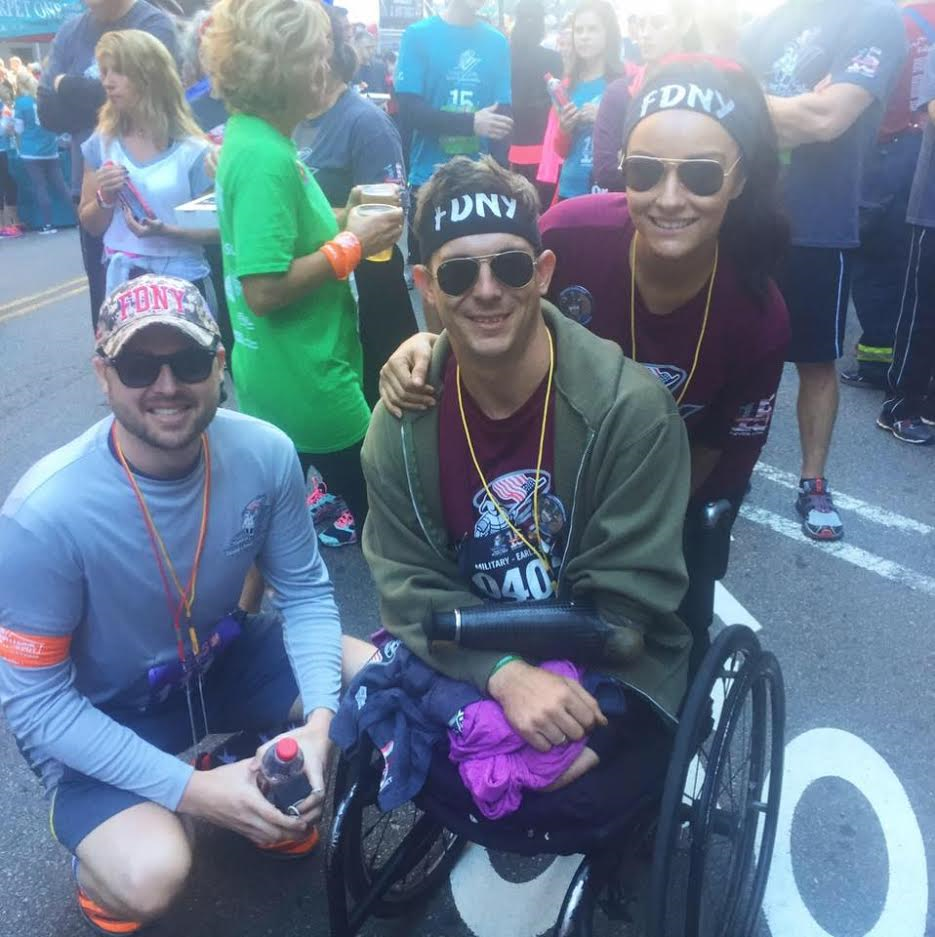 At the Stephen Siller Tunnel to Towers Foundation, we often speak of the amazing behind-the-scenes stories that define who we are. We’d like to share the story of how the Foundation came to meet Dustin Miller, the director for the Tunnel to Towers Tower Climb in Tampa, Florida, and how the relationship has evolved. Dustin’s story is unique, but not uncommon. He serves as another example of an individual who was so inspired by Tunnel to Towers that he decided to take on a significant role. This is his story!

Dustin’s competitiveness kicked in immediately. Along with his boss, Cat, and their team at Millennium Westshore in Tampa, they won the competition! They recruited sponsorships from vendors, held a rent raffle (one lucky resident won free rent for a month), a live jazz night, and with a silent auction. All told, they raised over $10,000!

Before flying to NYC, Dustin participated in the Orlando 5K where he met Sgt. Mike Nicholson and his fiancé, Katie (now his wife). Sgt. Nicholson received a smart home in 2014 through the Foundation’s Building for America’s Bravest program. A few weeks later, Dustin and Mike ran into one another again at the NYC 5K. They quickly became friends and have since stayed in contact.

Inspired by Mike Nicholson’s story and having experienced several T2T events firsthand, Dustin fell in love with the Foundation and its mission. In 2016, he was promoted to Business Manager at Millennium Westshore and because of his passion for giving back, decided to continue the fundraising efforts at Millennium. Lincoln, once again awarded him a trip to NYC!

This past September, after retracing Stephen Siller’s footsteps for the second time, Dustin spent some time at the airport with Orlando 5k Race Director, Kyle Albano. He felt compelled to find a way to bring a T2T event to Tampa. That’s when Kyle suggested reaching out to the Foundation for information on launching a tower climb. And that’s exactly what he did.

Shortly after securing a building and announcing the inaugural Tampa Tower Climb on Facebook, Mike Nicholson reached out to Dustin to offer to help organize the event. Over the past four months, Dustin and Mike, along with a handful of other volunteers, have been networking, organizing, and spreading the word. The Tampa Tower Climb is shaping up to be a huge success!

In the beginning this journey was about raising money to build smart homes. It has evolved into much more! Now, it’s about honoring our first responders. It’s become an opportunity to thank local firefighters, EMTs, police officers, and our military service members for putting their lives on the line every day. In addition, it’s become an exercise in building relationships within the community and cultivating new friendships with like-minded people. For Dustin, this event has become the ultimate way to pay it forward and give back to those who protect our community and our country, and to thank those who have sacrificed life and limb for our great nation.

We could not be more grateful to have Dustin as part of our Tunnel to Towers family! Thank you, Dustin. Not only for becoming inspired by the Foundation, but for having the ambition to turn your passion into creating the Tower Climb in Tampa! Your dedication to our cause is second to none. We love your hard work and enthusiasm! Thank you for standing tall for those who stand tall for us!

Like Dustin, all of us here at Tunnel to Towers continue to be inspired by our good friend, Sgt. Mike Nicholson. Mike has overcome so many obstacles and is now a devoted husband and loving father, in addition to a wonderful ambassador for our Foundation. Thank you, Mike, for joining Dustin in support of the Tampa event. We are so proud of you and honored to have your share your time and talents with us!

To join Dustin and Mike in Tampa on May 6th, please visit www.t2trun.org to register today!