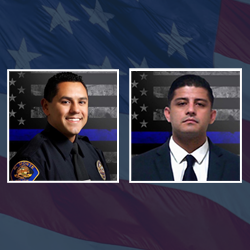 The Tunnel to Towers Foundation announced today that it will pay, in-full, the mortgages on the homes of two CA police officers who were shot and killed on June 14.

Corporal Michael Paredes and Officer Joseph Santana were both husbands and fathers, raised in the city of El Monte and had deep ties to the community they served.

Cpl. Paredes, 42, started as a full-time officer with the El Monte Police Department in 2000, was married to his high school sweetheart and has a daughter and son.

Officer Santana started his law enforcement career with the San Bernardino County Sheriff’s Department before joining the El Monte police department in 2021. He was married and has a daughter and twin boys.

Tunnel to Towers’ Fallen First Responder Home Program pays-off the mortgages for the families of law enforcement officers and firefighters who are killed in the line of duty with young children.

“We come together as a nation to honor the service and sacrifice of Officer Santana and Corporal Paredes. These two men were answering a call for help when they were gunned down by a criminal out on parole, a criminal who should have been in custody but was set loose to terrorize this city. This senseless and tragic loss has torn apart two families and the entire El Monte community and it could have been avoided,” said Frank Siller Chairman and CEO of the Tunnel to Towers Foundation. “The Tunnel to Towers Foundation will honor the memory of these heroes by ensuring that the families they left behind will always have a place to call home and will never have to worry about making another mortgage payment.”

Tunnel to Towers is dedicated to honoring the sacrifice of FDNY Firefighter Stephen Siller, who laid down his life to save others on September 11, 2001. For more than 20 years the Foundation has supported our nation’s first responders, veterans, and their families by providing these heroes and the families they leave behind with mortgage-free homes.