Former U.S. Army SPC and Stephen Siller Tunnel to Towers Foundation smart home recipient Matthew Levya will be hosted this weekend at the storied Army-Navy football game in Philadelphia in honor of his service.

Six years ago, Leyva was wounded when he was hit by an IED in Afghanistan. Leyva lost both of his legs and some of his fingers due to the explosion. Tomorrow, the Home Depot Foundation, the Stephen Siller Tunnel to Towers Foundation’s largest sponsor, will host Levya at the Army-Navy Game, a century-old rivalry football game, as the Army Black Knights battle the Navy Midshipmen in Philadelphia. Levya is the latest recipient of a new custom-built smart home, donated by the Tunnel to Towers Foundation and their partners. 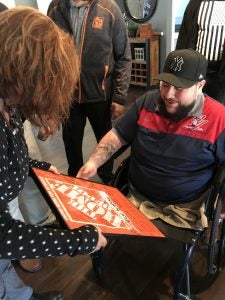 Every aspect of the house is designed to make life easier for a double amputee. The stove lowers to the proper height with the push of a button; the microwave pulls out like a cabinet, even the sink turns on with just the tap of a finger. Through the foundation’s Building For America’s Bravest program, we have delivered, started construction, or are in design stage of 66 mortgage-free smart homes, and we are committed to providing a minimum of 200 smart homes in the next few years.

The Foundation was started by the siblings of Stephen Siller, a Brooklyn firefighter who was lost when the South Tower collapsed on September 11, 2001. The Home Depot Foundation embodies our mantra to do good, and we thank them for their continued support of our nation’s veterans and their families.