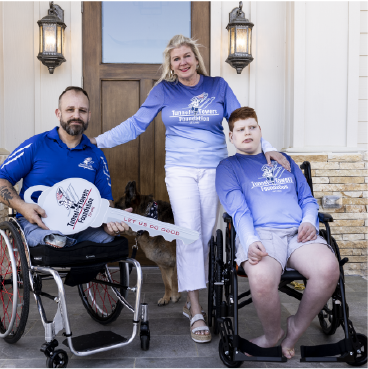 SPC Wheeler was critically injured in 2002 during a training exercise at the Joint Readiness Training Center at Fort Polk. After jumping out of a Black Hawk helicopter at 1,500 feet, his parachute malfunctioned at approximately 250 feet, causing Wheeler to hit the ground at full force. He suffered catastrophic damage to his body sustaining critical injuries to both legs, shattered his L4s and L5s in his spine, suffered a traumatic brain injury when he struck his head on the ground, and also sustained severe cone and rod issues in his eyes that left him legally blind. After dealing with pain and numerous infections for years, SPC Wheeler opted to have bilateral above-knee amputations in 2015.

SPC Wheeler joined the Navy in 1991, and also served as a firefighter on the USS John F. Kennedy aircraft carrier during the Gulf War. He was honorably discharged in 1993, but after the terrorist attacks on September 11, 2001 he decided to re-enlist in the Army and fight for our country.

SPC Jason Wheeler and his wife Kristi and son Nicholas were escorted to their mortgage-free smart home by a motorcade of North Texas Patriot Guard motorcycle riders, as well as vehicles from Denton County Sheriff’s Office and Denton County Emergency Services District #1. Wheeler’s smart home is completely accessible, with automatic doors, oversized doorways, and wider hallways. His kitchen cabinets are designed to allow him easy access to plates, cups, and bowls and his stove is specially designed to be height adjusted to his wheelchair. Every feature of SPC Wheeler’s home can be controlled through a tablet or a smart device. 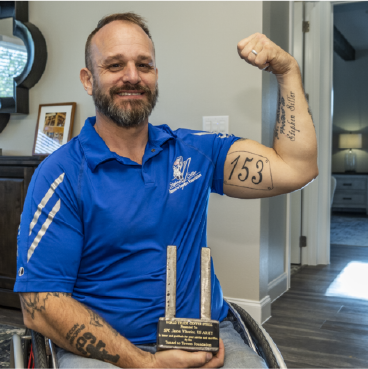 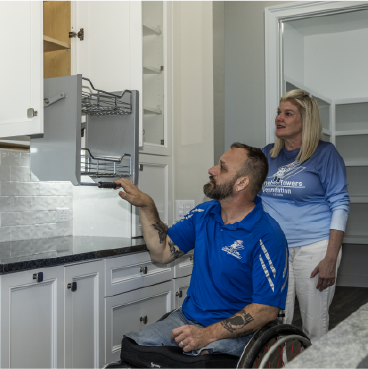 Tunnel to Towers’ Smart Home Program builds specially adapted mortgage-free homes that help our nation’s most catastrophically injured veterans and first responders reclaim their independence in carrying out day-to-day activities around the home. These homes have a myriad of features such as automated doors and lighting, wider halls and doorways, special showers to accommodate wheelchairs, and automatic door openers. All cabinets, counters, and stove tops can be height adjusted and most home systems are controlled by tablets.

Tunnel to Towers is the preeminent 9/11 charity organization that was founded from the tragedy of that day to honor the sacrifice of the Fire Department of New York City (FDNY) Firefighter Stephen Siller, who gave up his life to save others on 9/11. Our mission is to do good in honor of Stephen’s sacrifice, and to honor the sacrifices of our heroic military service members and first responders who have made supreme sacrifices in the line of duty by risking life and limb in protecting our communities and our country.