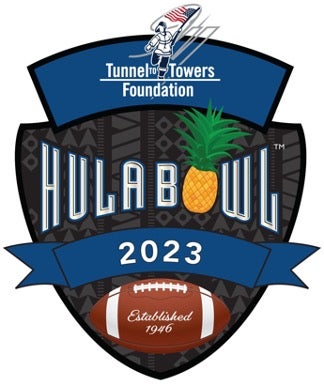 The 77th annual Hula Bowl game will showcase the top 100 collegiate players, matched with legendary NFL coaches. All NFL, XFL, USFL and CFL teams will be represented to scout players.

“The Tunnel to Towers Foundation has received tremendous support from the Logan family and the entire Hula Bowl organization. We are honored to serve as the Title Sponsor for the 77th iteration of this iconic game in Orlando. Our foundation has a very special relationship with the state of Florida, where we are currently developing our Let Us Do Good Village – a housing community that will soon serve 100 of our nation’s wounded veterans, Gold Star families, and fallen first responder families,” said Tunnel to Towers Chairman and CEO Frank Siller.

“The Hula Bowl team is pleased to be collaborating with The Tunnel to Towers Foundation, and we are proud to stand with their commitment to honor our military and first responders, who have made and continue to make the supreme sacrifice of life and limb for our country,” said Hula Bowl Chairman Nick Logan.

The Hula Bowl will donate $10 from each ticket sold to Tunnel to Towers that help support America’s Heroes and their families.