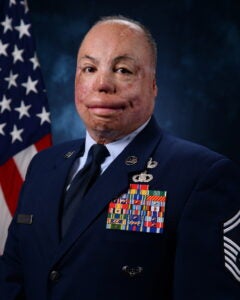 On October 19, the Tunnel to Towers Foundation welcomes an American hero and his family into their new mortgage-free smart home in Peyton, CO.

U.S. Air Force Senior Master Sgt. Israel Del Toro Jr.’s Humvee hit an IED in Afghanistan on December 4, 2005. The blast left him with severe burns on more than 80% of his body. He lost all of his fingers on his left hand and the fingers on his right hand were amputated at his knuckles.

He was given a 15% chance of survival. In spite of that, he walked out of the hospital and became the first fully disabled airman to be permitted to re-enlist. He competed in the 2016 Invictus Games setting records and winning a gold medal in the shot put.

He retired from the Air Force in 2019 and now shares his story of recovery and resilience with audiences across the nation to help others find light in the darkness.

Del Toro’s smart home is completely accessible, with automatic doors, and wider hallways, for example, allowing him to freely move through the home on his own. Every feature of the home, including the lights, thermostat, and security system, can be controlled via an app on a smart device or via touch screens built into the home.

In attendance at the dedication ceremony were Air Force Senior Master Sgt. Israel Del Toro Jr. and his family, Tunnel to Towers Board Member and ret. FDNY Battalion Commander Jack Oehm, and Tunnel Towers national and local sponsors and partners and many more members of the community. The National Anthem was performed by the USAF Academy Band’s TSgt Denver Murphy.

The dedication followed the procession of Patriot Guard Riders and local first responders who escorted the Del Toro family to their new home. The U.S. Airforce Academy honor guard presented the colors and the USAF Academy Band’s TSgt Denver Murphy performed the national anthem during the ceremony. Following the dedication ceremony, SMSgt Del Toro raised the American flag outside of his new home for the first time.

Join us on our mission to provide smart homes to America’s heroes by donating $11 per month at T2T.org.