43 FANS WILL WIN A PAIR OF TICKETS TO SEE CARRIE UNDERWOOD ON TOUR! 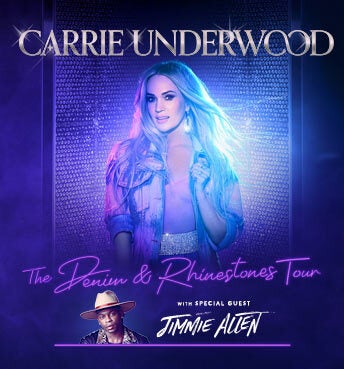 Oct. 7, 2022 – The Tunnel to Towers Foundation is launching the Carrie Underwood & THE DENIM & RHINESTONES TOUR Ticket Sweepstakes. Fans can enter to win two tickets to see the 8-time GRAMMY® Award winner and 3-time ACM Entertainer of the Year, Carrie Underwood, on THE DENIM & RHINESTONES TOUR, with dates in Fall 2022 and Spring 2023. The tour is making stops at arenas in 43 U.S cities. Fans can enter to win a pair of tickets in the city of their choice.

The tour, promoted by AEG Presents, will kick off on October 15 in Greenville, SC, making stops across the U.S. in cities including New York’s Madison Square Garden, Nashville’s Bridgestone Arena, and L.A.’s Crypto.com Arena before concluding in Seattle, WA on March 17. Underwood will be joined on THE DENIM & RHINESTONES TOUR by special guest Jimmie Allen on all dates.

Tunnel to Towers is sponsoring the Carrie Underwood & THE DENIM & RHINESTONES TOUR Ticket Sweepstakes. The sweepstakes runs from 12:00 am ET on October 8, 2022 until 11:59 pm ET on March 1, 2023 and is happening in tandem with the tour. Fans can enter for a chance to win online at T2T.org/carrie-underwood-sweepstakes. Entrants must be 18 years of age or older and a legal resident of the fifty United States or District of Columbia. The winner in each city will be notified ahead of each stop on the tour. The winning tickets will be distributed electronically. Entrants are required to read the complete terms and conditions of the sweepstakes upon entering.

When the tour was announced in May, Underwood continued her longstanding tradition of designating a portion of ticket sales from her tours to support worthwhile charities and organizations. She arranged for a donation of $1 from each ticket sold for THE DENIM & RHINESTONES TOUR to be contributed to the Tunnel to Towers Foundation.

“We want to thank Carrie Underwood for her continued support of our Foundation and our mission to protect the families of those who risk their lives every day to protect us,” said Tunnel to Towers Chairman and CEO Frank Siller, who added “we are thrilled to offer the chance for some special fans to get the opportunity to see Carrie’s new show, live and in person.”

The Tunnel to Towers Foundation has been helping America’s heroes since 9/11 by providing mortgage-free homes to Gold Star and fallen first responder families with young children and by building custom-designed smart homes for catastrophically injured veterans and first responders. The Foundation is also committed to eradicating veteran homelessness and aiding the victims of major U.S. disasters.

Carrie Underwood is a true multi-format, multi-media superstar, spanning achievements in music, television, film, and as a New York Times bestselling author and successful entrepreneur. She has sold more than 64 million records worldwide, recorded 28 #1 singles (14 of which she co-wrote), is the most-awarded female country artists for singles in RIAA history, and has seven albums that are certified Platinum or Multi-Platinum by the RIAA, all while continuing to sell out arena tours across North America and the UK.  All nine of her consecutive album releases (two of which she co-produced) from the beginning of her career debuted #1 on the Billboard Country Chart, making her the only artist to accomplish that feat. She has won over 100 major awards including 7 GRAMMY® Awards, 15 ACM Awards including three for Entertainer of the Year (the first female in history to win twice and the only female ever to win three times), 22 CMT Music Awards (holding the record for the most award wins ever for the show), 7 CMA Awards, and 15 American Music Awards. She has also built a successful business portfolio inspired by her passion for health and wellness, including her fitness and lifestyle brand, CALIA by Carrie Underwood, bestselling book, FIND YOUR PATH, her fit52 app, and a partnership with BODYARMOR Sports Drink.