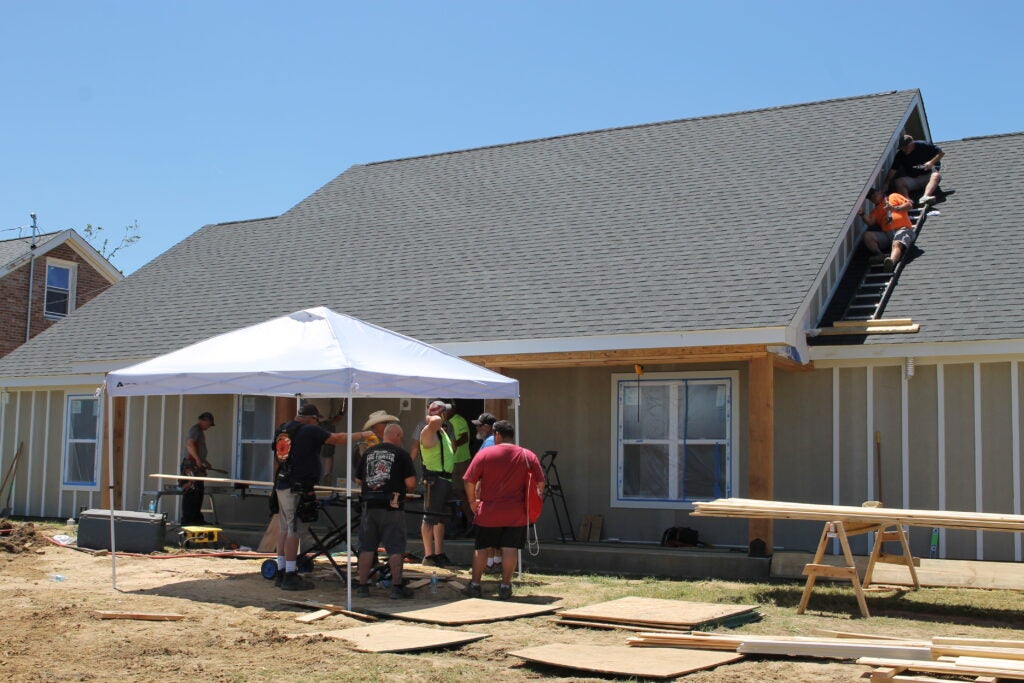 The Tunnel to Towers Foundation and A Soldier’s Journey Home have built a fully accessible, mortgage-free home in Mayfield, KY for Tim Andreasen, a disabled Army veteran who lost his home during the deadly tornadoes that hit the mid-west in late 2021.

Over 170 volunteers have been in Mayfield, Kentucky for the start of the build from June 6 through its completion on June 18th to build a fully accessible home for Tim Andreasen in only 12 days. 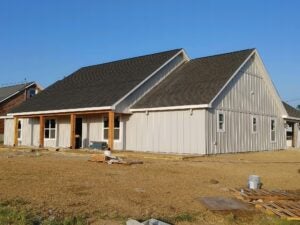 Just two weeks before Christmas, Tim and his children Lane, 8, and Lillie, 10 along with his disabled mother and step-father were at home watching the approach of the severe weather in their area. At around 9 in the evening, their house lost power and he received an emergency alert. When the storm was about to hit their house, Tim ushered his daughter Lillie into the room with his mom and stepdad. He then picked up his sleeping son Lane and ran into the hallway to take cover, shielding Lane’s body against the wall with his own. Within seconds, his home was hit by the tornado. Glass started breaking all around and Tim felt his body being pulled by the tornado, but he held his ground. As it was happening, he heard Lillie yelling, “Save my daddy, save my daddy, save my daddy!”

The tornado passed through for 10 minutes, which felt like hours to Tim and his family while they took cover in their family home. Miraculously, his entire family survived, but their home was destroyed and there was catastrophic damage to his community. The tornado had severely damaged the city’s town hall and records building, post office, water treatment plant, police department and jail, fire department and a number of other vital locations, nearly crippling the infrastructure. 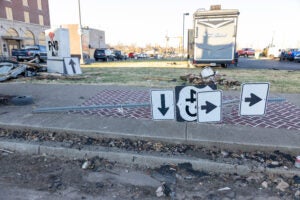 Trees were completely stripped of their bark, while cars and semis were thrown hundreds of yards and mangled. Radar imagery showed that the tornado had lofted debris up to 30,000 feet into the air as it impacted the city. Items were later found hundreds of miles away in neighboring Indiana. Twenty-two people were killed in and around Mayfield, with hundreds more injured, many severely.

Representatives from the Tunnel to Towers Foundation visited Mayfield on December 21 last year, to aid in disaster relief by distributing 15,000 toys to displaced children, barbecuing for the community, and committing millions to the rebuilding effort. 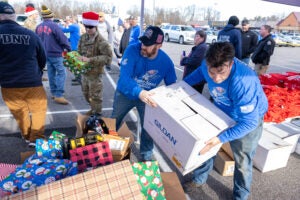 “When the Foundation came to Mayfield just before Christmas last year, we made a promise to the community that we would be back, that we would not forget them. I’m proud to say that we have kept that promise, and that in partnership with A Soldier’s Journey Home, we are building a mortgage-free home for one of our nation’s deserving veterans, a Mayfield native. This is the fourth home we will have built with A Soldier’s Journey Home, and we could not think of a better team to work with on this build,” said Tunnel to Towers Chairman and CEO Frank Siller. 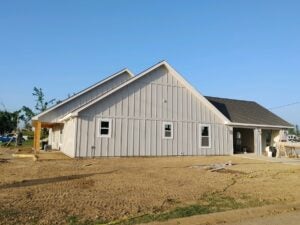 “A Soldier’s Journey Home has its origins in responding to natural disaster sites to help communities rebuild. When the alarm goes off in the firehouse, it’s because someone needs help. And that’s what we’re here for,” said Patrick “Paddy” Neville, a Navy veteran, retired FDNY firefighter and A Soldier’s Journey Home president. “We have more than 170 volunteers from 22 states building Tim and his family a new home.”

A Soldier’s Journey Home was founded in 2014 and is a 100% volunteer non-profit organization based in Hixson, TN, drawing active and retired firefighters, veterans and other volunteers from throughout the nation to help injured veterans realize their dream of owning a home, unencumbered by any burden.

The Tunnel to Towers Foundation is the preeminent 9/11 organization that is dedicated to honoring the sacrifice of FDNY Firefighter Stephen Siller, who laid down his life to save others on September 11, 2001. For more than 20 years, the Foundation has supported our nation’s first responders, veterans, and their families by providing these heroes and the families they leave behind with mortgage-free homes.