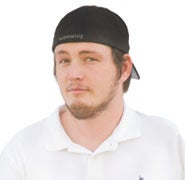 In June of 2012, as his year-long deployment to Afghanistan was nearing its end, Army Medic, Zachary Parker, was on route clearance patrol when he stepped on a dismounted IED. Zach became a triple amputee, losing his left arm through the shoulder, right leg at the hip, and left leg above the knee.

The Louisiana native’s entire family, as well as his good friends, came to his side to lend support and encouragement.

He enjoys fishing, hunting, and swimming, and is an avid fan of the Pittsburgh Steelers. Misty, Zach’s wife also serves in the military.

In 2017, Zach and Misty received their smart home and welcomed their newborn son.