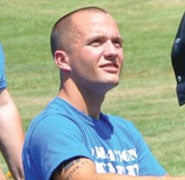 During an interview, Tyler Huffman was asked what he would want people to know about being a Marine. He replied, “That freedom is not free. It has a price. It always has and always will.” It was in the process of defending and protecting us in Afghanistan, that Tyler suffered injuries from two shots into his chest, which left him paralyzed in 2010.

Tyler stated, “We are the greatest and most blessed nation, and we take too many things for granted. We should be grateful to God for our freedom and liberty.”

Tyler received his smart home in November 2012. He says his home has drastically improved his live and has made him self-sufficient once again.