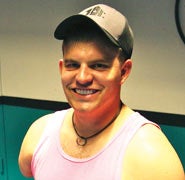 “Help my soldiers,” Travis Mills yelled several times at a medic. Minutes before, the staff sergeant lost his legs and arms after stepping on an improvised explosive device (IED).

Travis, a weapons squad leader, brought over a dozen soldiers and an explosive ordnance disposal team to an abandoned Afghanistan National Army security post on April 10, 2012. Soon after entering the area, the bomb exploded. As a result of his extensive injuries, Travis suffered the loss of both arms and legs.

Travis has a no-nonsense approach to the devastating injuries he sustained. “Life’s hard, and this kind of stuff happens,” he says. “I’ve always been positive, I’ve always been motivated. I have to get better. I got a wife and child to take care of.”

In October 2014, Travis, his wife Kelsey, and daughter Chloe, received their new smart home. When asked about what receiving a new smart home means for him and his family, Travis said, “This is the final step in my rehabilitation. The last bit of independence and freedom is owning a home.”

Travis and Kelsey welcomed their second child, a son, in 2017.