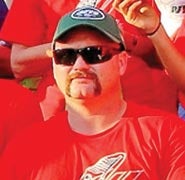 GySgt. Travis Green enlisted in the Marines in 1999. A true leader, Travis planned and participated in hundreds of Explosive Ordnance Disposal operations within the U.S. and abroad. He has neutralized countless UXO’s and hazardous devices, at times coordinating with various civilian agencies and other branches of the military.

Travis completed combat deployments to Kuwait and Iraq before deploying to Afghanistan in 2011. Shortly before he was scheduled to return home, he was injured while under fire near Kajaki Dam. As a result of an IED detonation, Travis suffered the loss of both legs above the knee.

Travis has not let his injury define him. He enjoys rowing and hand cycling, and most of all, spending time with his family. Travis is the proud father of four daughters.

He received his smart home in October 2015.