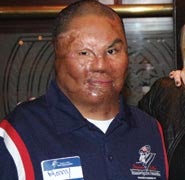 Tony Porta, a native of Peru, had a lifelong dream to become a U.S. Marine, which he fulfilled shortly after graduating high school in 2005.

On May 5, 2007, while serving in Al Asad, Iraq, the Humvee that Tony was driving struck an improvised explosive device, severely burning him over 80% of his body. His fellow marines and dear friends, Msgt. Kenneth Mack and Cpl. Charles Palmer II made the ultimate sacrifice that day.

Corporal Porta suffered the loss of his right arm, fingers on his left hand and facial disfigurement. He has undergone well over 100 surgeries to aid in his recovery.

Tony and his wife Deicy are proud parents of a son and daughter. Their son, Kenneth Charles, was named in honor of Tony’s fallen brothers.

Tony received his smart home in July of 2015 in Lovettsville, VA.