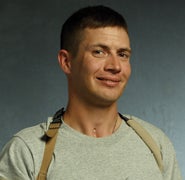 On March 26, 2010, Cpl. Todd Nicely was leading his 1st Squad infantrymen back from a security patrol in Afghanistan. Just as he began to cross the bridge, he stepped on a pressure-plate rigged to a mine. He lost both legs and both arms.

Todd’s take on his injury would humble most of us: “I consider myself pretty lucky. I wake up every morning and figure I have a second chance at life, so I get up and go.” He is an inspiration to other injured service members who are encouraged by the positive example that Todd has set.

Todd is due to receive a home in 2019. When Todd was asked about the benefits of receiving a smart home, he explained, “The foundation doesn’t build cookie-cutter homes for these guys, they build them for their special needs, any one home is not going to be the exact same when you get into it. That’s a big thing when you’re a young man in the military coming out, 23, 24 years old, you don’t want someone having to take care of you. I’m grateful that someone was able to step up and build me a home like this.”