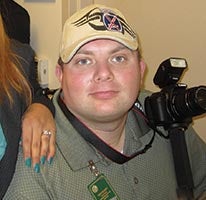 Specialist Timothy Senkowski, of the A Troop 3-71 Cavalry 10th Mountain Division was critically injured in October of 2011 in Afghanistan when a rebel soldier detonated a bomb by cell phone as he was trying to build a checkpoint.

That same month, Tim was moved to the Walter Reed Medical Center in Washington, D.C., where he remained until returning home to Anderson, Indiana. His injuries included a double above-the-knee amputation, and while medics were able to help save his right arm, he is missing six-to-eight inches of his ulnar nerve, half of his biceps and three-quarters of his triceps, and suffered hearing loss, traumatic brain injury and PTSD.

Tim and his wife Erica and their three sons have created a wonderful family life. Tim likes to weld and work on cars, work with RC cars and planes and attend drifting events.

The Senkowski’s home reconstruction and modification was completed on June 14, 2018.