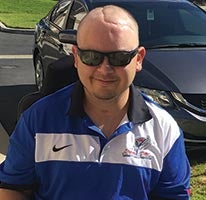 Corporal Timothy Jeffers, USMC, graduated from Fountain Valley High School in Fountain Valley, CA. He followed in his grandfather, John Mark Jeffers Sr., and brother, Chris’s footsteps by joining the Marine Corps as a reservist in 2002 and volunteered for active duty in 2005.  He was eventually assigned to 3rd Transportation Support Battalion, 3rd Marine Logistics Group, as a motor transport operator, in Iraq’s Anbar Province. He was three months into a seven-month deployment in 2006 when he dismounted the lead security vehicle in a convoy, took a few steps off the road during a security sweep and had his life changed forever. An improvised explosive device (IED) exploded, leaving him with critical wounds on two-thirds of his body. Tim sustained severe abdominal and head injuries, lost both of his legs above the knee, a finger on his right hand, and his right eye and suffers from PTSD.

Tim’s rehabilitation is ongoing but he lives an independent and engaged life. He enjoys the close relations with his family, the friendships he has gained and close contact and camaraderie with his fellow Marines. He particularly likes attending sporting events, fishing, lobster trapping and surfing with the VA rehabilitation activities department.