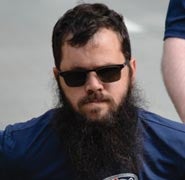 Thomas McRae, a native of Alaska, enlisted in the Marines at age 18. He served three tours of duty in Iraq and, at the age of 29, was on his second tour of duty in Afghanistan when he sustained catastrophic injuries.

On January 16, 2012, McRae was on foot patrol investigating an explosive threat when an improvised explosive device was detonated underneath him. Thomas suffered the loss of his legs and left arm, and sustained injuries to his brain and loss of sight in his right eye.

Friends and fellow Marines describe Thomas as a true leader, friend and selfless in his actions. GySgt. McRae, who is a loving parent to daughter Aidan, received his smart home in April of 2016.