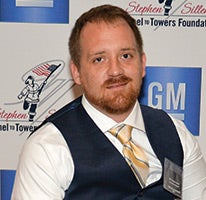 On February 7, 2012, Army SPC Terence “Bo” Jones was on patrol in Afghanistan when he stepped on an antipersonnel mine.

He lost his legs in the blast, doctors were able to save his left arm, but his bones are now fused at the elbow.

In the years since he has had more than 130 surgeries, doctors are still working to fix his arm.

After his injury SPC Jones took welding classes and now he builds custom wheelchairs with the company Box Wheelchair and he hopes to help other veterans.