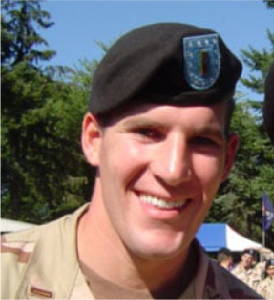 In 2005, he was leading his Platoon in Iraq when a suicide car bomb detonated in front of him. The blast sent shrapnel through his eyes, leaving him blind and temporarily paralyzed. Scotty refused to let the injury stop his military career. He became the first blind active-duty officer in military history. After many years, he officially medically retired from the military in 2015.

He continues to find ways to push himself and inspire others. He completed the Coeur d’Alene Iron Man, climbed Mt Rainier, and went skydiving – all after losing his sight.

He now speaks around the country, sharing his message of perseverance, courage, and hope.

The Tunnel to Towers Foundation paid off the mortgage on his home in Pasco, Washington.