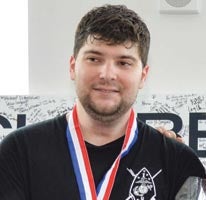 Scott A. Nokes, is a hero to so many. He has twice saved someone’s life. As a volunteer firefighter, he once rescued a boy from a fire. Another time, he saved a fellow student while attending a ROTC camp. As a Corporal and rifleman in the Marines, assigned to 1/8 Charlie Company, he was twice deployed to Afghanistan. While on his second deployment, Scott developed dysentery, which led to unresolved GI issues, sepsis and the eventual amputation of both of his legs below the knee as well as the loss of his vision.

An avid hiker and camper he is currently working to complete his college degree majoring in history, homeland security and becoming literate in Braille and hopes to develop a career in peer mentorship.

The Stephen Siller Tunnel to Towers Foundation is honored to support Scott and this new chapter in his life with a custom-designed smart home. These homes enable our most severely injured heroes live better, more independent lives.

The Tunnel to Towers Foundation gave Scott his new smart home in December 2019.