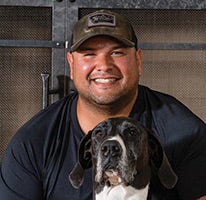 Army Sergeant Saul Martinez enlisted as an Army Infantryman in 2006.

In May 2007, during the surge Martinez’ vehicle was hit by projectile improvised explosive device.

The explosion killed two other soldiers in his vehicle and Martinez survived but he lost both legs and suffered a traumatic brain injury.

After nearly a year of rehabilitation, Martinez remained on active duty and took on a role in the Warrior Transition Unit. There he assisted soldiers, Marines and sailors with similar conditions and experiences in their transition out of the military.

After leaving the military Martinez moved his family to Montana and graduated from Montana State University and continues to serve as an active advocate for wounded and injured veterans and their welfare.

In 2017 former President Bush painted Sgt Martinez’s for his “Portraits of Courage,” a series of paintings that aimed to bring visibility to our nation’s service members and their stories.

The Tunnel to Towers Foundation has built him a smart home in Bozeman, Montana.