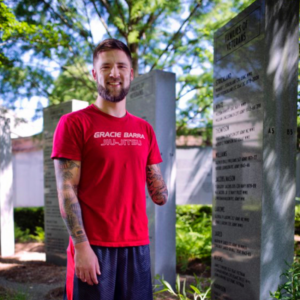 Army SGT Samuel Walley comes from a long line of soldiers. When he decided to serve his country he followed in his father’s footsteps and enlisted in the Army.

On June 6, 2012, he was on a recon mission in Afghanistan when he stepped on an IED.

He lost his right leg above the knee and his left arm below the elbow, and suffered a traumatic brain injury and other injuries.

Since his recovery SGT Walley has focused on helping other veterans. He graduated from college with his bachelor’s degree and worked in a congressional office.

For SGT Walley and his wife Hannah, getting a smart home means living in a place that works with him instead of against him.

“Everything that I do at home I have had to adapt to in order for it to work. Although I am only 28, this takes a toll on my body. The smart home would adapt to me, instead of me always adapting to the home.”

Tunnel to Towers is building SGT Walley a new smart home in Georgia.