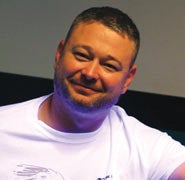 On September 21, 2010, Army SSG Rusty Dunagan was conducting combat operations in Afghanistan when a land mine and homemade bomb was detonated. As a result of the blast, Rusty suffered amputation of both legs and his left arm. Rusty has overcome serious infections and endured over thirty surgeries.

Throughout his recovery, Rusty has been surrounded by the love and support of his parents, brother, wife and children.

Rusty enjoys grilling, hunting and reading a good book. He received his smart home in May 2015.