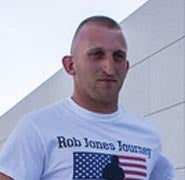 United States Marine Corp Reserve Sgt Robert Jones of Bravo Company, 4th Combat Engineer Battalion, was deployed in Iraq in 2008 and then to the Sangin and Delaram in Afghanistan in 2010.

During his deployment to Afghanistan, while operating as a part of a push into Taliban territory, he was tasked with clearing an area with a high likelihood of containing an IED. On July 22, 2010, Sgt Jones was severely wounded when a landmine detonated. He lost both legs above the knee.