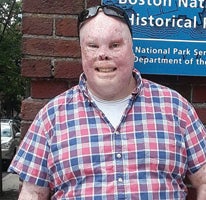 Richard (Rick) Yarosh joined the Army in 2004, inspired by the story of a fallen soldier near his hometown of Winsor, NY. He was on a patrol in the Abu Ghraib region of Iraq when the Bradley he was traveling in was hit by an IED. The blast ruptured the fuel cell and caused the vehicle to burst into flames. Rick suffered burns over more than half his body, had his right leg amputated below the knee and lost the use of his hands.

Now retired from the Army, Rick gives inspirational talks around the country and has spoken to over a million students to date. He speaks about hope, and the ability to get through anything with a positive attitude. He wants to present his unique message of hope to students in every state.

Yarosh and his family received their smart home in Vestal, NY in May 2019.