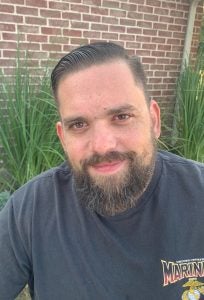 Cpl Patrick Myers enlisted in the Marine Corps in 2003. After boot camp, he went through Combat Training and Radio Operator School. While assigned to the 2nd Marine Regiment Headquarters Company, Cpl Myers was sent to Iraq for a six-month deployment in January 2005. The deployment was later extended for a year. On November 9, 2005, Cpl Myers’ vehicle was hit with an IED. Both of his legs were amputated above the knee, and he suffered multiple other injuries, including a traumatic brain injury, internal bleeding, a broken back, the collapse of his lungs, and PTSD. Cpl Myers has volunteered with several non-profits over the last 15 years, including the Coalition to Support America’s Heroes and Texas Hunters for Heroes.  He currently coaches his youngest son’s football and baseball teams and loves having the opportunity to mentor these children while educating them about people with disabilities.

The Tunnel to Towers Foundation is building a smart home for Cpl Myers in his home state of Texas, where he resides with his wife Mindy and their five children.