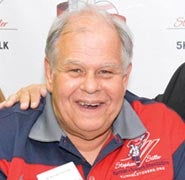 On January 15, 1971, while on patrol in an infantry unit in central Vietnam, USMC Sergeant Sulsona stepped on a land mine. The explosion resulted in multiple wounds, including the amputation of both legs above the knee. He spent multiple weeks in a hospital in Guam before being transported to the Philadelphia Naval Hospital. Sergeant Sulsona was awarded the Purple Heart and Bronze Star.

Sulsona credits other injured service members at the Philadelphia Naval Hospital with passing along words of wisdom that enabled him to persevere and carry on with a positive outlook. In the years that followed, Sulsona graduated with honors from prestigious Goddard College with an MFA in Writing. He has written 23 plays, 35 productions, and 15 screenplays, and has earned four national awards including the Kennedy Center Award for playwriting.

Sulsona now serves an ambassador to the Tunnel to Towers Foundation, providing valuable advice, guidance, and mentorship to injured service members. Mike Sulsona and his wife, received their smart home in Staten Island, NY, on July 2, 2019.