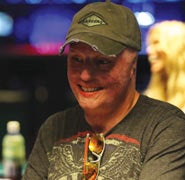 SFC Michael Schlitz says, “There are only two ways to find an improvised explosive device. Either it finds you or you find it first. Unfortunately, it found us that day.”

In 2007, Michael and his unit were in Baghdad on a basic road-clearing mission looking for enemy explosives. Two artillery shells attached to a propane tank went off and destroyed Michael’s truck, threw him away from the blast, and set his entire body on fire. Michael describes the incident as “basically being burned alive.” He not only lost his arms and suffered burns on over 85% of his body but also had to deal with the tragic deaths of his crewmates.

Today, Michael shares his story of what he has learned with fellow wounded servicemen and women. Michael says, “On the day I got hurt, I lost my entire crew. Now, I want to live a better life for them. A life they would be proud of.”