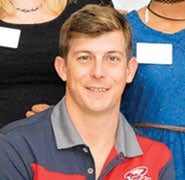 Eight months after arriving at the National Naval Medical Center, Sgt. Michael Nicholson was greeted by thousands of supporters when he returned home to Tampa, Florida. At his church, he spoke to the crowd, “I just want to ask for one more thing, please pray for the guys still in Afghanistan. Pray for the ones who didn’t make it back.”

Sgt. Michael Nicholson was on combat foot patrol in Afghanistan when he was injured by an improvised explosive device (IED), causing him to lose both legs and his left arm. Despite his personal trauma, Michael says he was awestruck by his hometown’s support. “They have done so much for me. I wish I could do something for them.”

After almost two years at Walter Reed National Military Center, Sgt. Nicholson, retired from the Marine Corps in April 2013 and moved back to Tampa where he enthusiastically received his smart home. He had been intimately involved in the design and layout of the home to help maximize accessibility that would provide him the independence he deserves.

Sgt. Nicholson and his wife, Katie are the proud parents of a daughter and son.