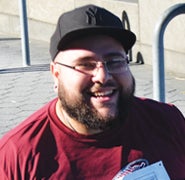 The blast caused injuries that resulted in the loss of both his legs, the loss of four of his fingers (his pinky and ring fingers from each hand), and a shattered left elbow.

SPC Leyva, who is from Central New York, received his smart home in Pompey, NY on September 11, 2017 at the moment the South Tower fell.