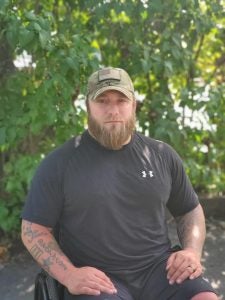 Army Specialist Matt Daniels, a rifleman/gunner suffered a spine injury while deployed to Iraq. After retiring from the army, he lost the ability to walk unassisted. The nerve damage eventually led to the use of a wheelchair.

Since retiring from the Army, SPC Daniels has pursued Sled Hockey with a local all Veteran Team and continues to go about his life with his wife and four children.

In 2017 Spc Daniels adopted a child and gained sole custody of her sister.