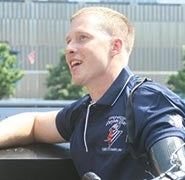 Cpl. Mark Litynski always wanted to be in the Marine Corps, so after a year of college he decided to enlist, despite leaving behind his girlfriend, Heather, whom he knew he would miss. After two years and a Marine expedition deployment, Mark and Heather were married. They now have a child.

During Mark’s second deployment in Afghanistan, he volunteered to be the point man on a foot patrol. On November 19, 2010, he stepped on an improvised explosive device. He suffered the loss of both legs above the knee and his left arm above the elbow, in addition to breaking his pelvis. Just two months after his injury, he was up and walking on his first set of prosthetics.

When asked about how a smart home will impact his life, Mark replied, “It will relieve my wife’s anxiety when she is working, and it will allow me to be more independent and take better care for our kids when they come into the picture.”