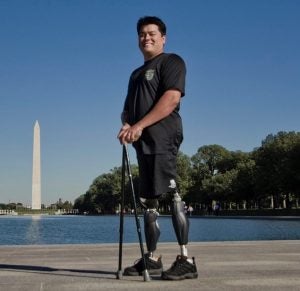 U.S. Army Special Forces SFC Mark Holbert was born into a military family – his father served for 25 years, and his grandfather fought in WWII.

He dreamed about serving his country and made that dream a reality by enlisting on November 13, 1996.

He served multiple tours including three tours in Afghanistan – on his fourth tour on August 16, 2010, he stepped on an IED and lost two fingers, and both of his legs.

His injury has not stopped him or even slowed him down.

Since his injury, he has graduated from Georgetown University and completed five triathlons,  four 200 relays, and four army 10 milers. He’s now set his sights on completing a full of half Ironman.

He lives in Virginia with his wife Tiffany and two daughters.

The Tunnel to Towers Foundation has renovated and paid off the mortgage on their home.