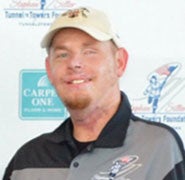 Marcus Burleson served three deployments in Iraq, Papua New Guinea and Afghanistan. In Afghanistan, Mark was serving as team leader for his EOD Company. On December 9, 2011, he and his team were on dismounted patrol when they encountered a suspicious area. Mark was able to locate and render safe the first improvised explosive device (IED).

As he was conducting a secondary sweep, he identified a second IED. While attempting to render the second device safe, the IED detonated as Mark was kneeling over it. As a result of the explosion, Mark suffered the loss of one arm and severe injuries that resulted in later amputation of the other arm. He also endured a broken neck and other bones, vision loss in his left eye, and other major injuries.

Mark enjoys giving back to the veteran community, engaging in public speaking and raising awareness for veterans. Mark is the proud dad of three children: Marcus, Isaac and Ariel.

Marcus received the keys to his smart home in Dublin, Texas on November 21, 2017.