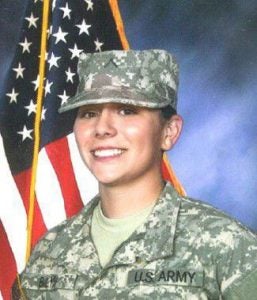 Maggie Mae Bilyeu was born and raised in Owaneco, Illinois. In October 2015, at the age of 25, Maggie joined the U.S. Army and was stationed at Fort Hood, Texas for basic training prior to her deployment to Bagram, Afghanistan later that year.

In early 2016, only a couple of months into her deployment as part of Operation Freedom Sentinel, Maggie was struck by a suicide bomber, leaving her critically injured, and killing two American soldiers and two American contractors.
Maggie sustained multiple shrapnel wounds to her chest and torso, a broken leg, and numerous internal injuries as a result of the blast.

On November 12, 2016, after returning to the U.S. for care, Maggie underwent numerous treatments resulting in the loss of part of her small and large intestine, part of her colon, a splenectomy, repairing a split in her diaphragm, and lost a portion of her left breast. Maggie went on to lose her left leg below the knee as a result of the injuries sustained during the attack. She has also been diagnosed with TBI, loss of hearing, and tinnitus.

The Tunnel to Towers Foundation is committed to building a mortgage-free smart home for Maggie and her wife, Mia, in Texas, which will allow Maggie to continue to receive medical care while she gets back to the outdoor hobbies that bring her comfort and joy.