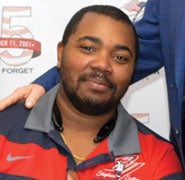 In 2007, Cpl. Larry Bailey made his father proud by following in his footsteps and enlisting in the United States Marine Corps. He showed his commitment to others while deployed as a Senior Machine Gunner in Afghanistan. When an enemy attack caused a fellow service member to be injured, Larry immediately provided cover fire that allowed the Marines to transport their comrade to safety.

In 2011, Larry and his unit were ambushed by small arms and machine- gun fire that killed a fellow Marine. While trying to repel the assault, Larry struck an improvised explosive device (IED) and was injured, resulting in the amputation of both legs above the knee and loss of his left hand. Larry received the Purple Heart for his combat wounds.