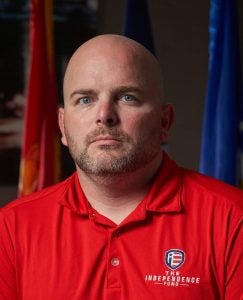 ARMY CPL Kevin Brewington enlisted in 2010 and deployed to Afghanistan a year later. On September 22, 2011, CPL Brewington’s unit was returning to base when he triggered an IED. He lost both legs instantly in the blast and nearly lost his right arm. He underwent nearly 50 surgeries, and after a year and a half of therapy, he medically retired from the army in 2013. Since his retirement, he has worked to support his fellow veterans serving as an ambassador and working with nonprofits that take veterans on outdoor excursions. He lives in Jonesville, South Carolina with his wife and two daughters.

The Tunnel to Towers Foundation will be paying off the mortgage on his home and adding smart technology to help CPL Brewington to live more independently.

“It will take a financial burden off of our family and additions that the smart home will add to our home will make it easier on me and make it easier for me as a father,” said CPL Brewington.