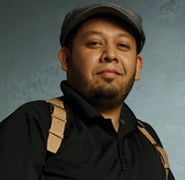 Cpl. Juan Dominguez slipped down a small embankment while out on patrol and landed on a buried bomb. In the explosion he lost both his legs above the knee and his right arm.

Despite Juan’s injuries, multiple surgeries, and grueling occupational and physical therapy sessions, he is thriving: “My injuries that I sustained in Afghanistan against the enemy forces were well worth it. I love this country.”

Cpl. Dominguez received his smart home with wife, Alexis, on September 11, 2012. When asked about the specially adapted house, Juan says “it changed my life.”