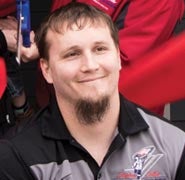 Following in his great-grandfather’s footsteps, Joshua Stahl joined the Army in July of 2007. He served his first deployment in Iraq in 2008 and 2009, reenlisted for another five years, and was deployed to Afghanistan as the leader of a scout team.

On July 9, 2011, the four-year anniversary of his enlistment, Joshua was on a mission to clear and secure an area. While attempting to clear a path, he stepped on an improvised explosive device. As a result of the explosion, Joshua suffered the loss of both of his legs above the knee, amputation of his left index finger, a traumatic brain injury, and other serious injuries.

Joshua is a fan of video games, working out, wrestling, and the Dallas Cowboys.

Joshua, his wife, Truda, and their five children moved into their smart home in December of 2016.