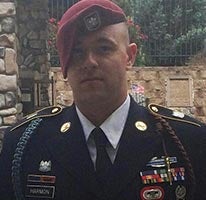 Army SGT Jonathan Harmon, infantryman with the 82nd Airborne Division, was on foot patrol in Afghanistan’s Kandahar Province when he stepped on a pressure plate IED and was catastrophically wounded on June 7, 2012.

He immediately lost his right leg, and later had his left leg amputated in the hospital. He also suffered a traumatic brain injury.

Despite his injuries, SGT Harmon continued to serve his country through the Continuation of Active Duty Program, mentoring and providing inspiration to his fellow paratroopers as the Division’s liaison at Walter Reed National Military Medical Center, until he retired in March 2019.

He now serves as vice president of a nonprofit organization, Veterans Enhancement Project, which builds custom motorcycles for veterans at no cost and teaches them how to ride. He is also pursuing a college degree in STEM nutrition.