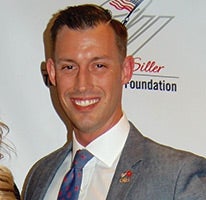 SSgt Johnny “Joey” Jones enlisted in the Marine Corps after high school, and he worked as an Explosive Ordnance Disposal Technician, deploying to Iraq in 2007 and Afghanistan in 2010.

On August 6, 2010, he stepped on and detonated an improvised explosive device, resulting in the loss of both of his legs above the knee and severe damage to his right arm and left wrist.

Since his recovery he has worked tirelessly to improve the lives of his fellow veterans.

He serves as Chief Spokesperson and military liaison for Zac Brown’s Southern Ground, and provides commentary as a military analyst on many TV networks.

The Tunnel to Towers Foundation paid off the mortgage on his home in Sharpsburg, Georgia and made renovations to make his home more accessible, allowing him to live his most independent life.