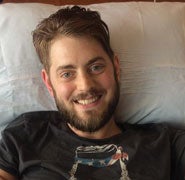 USMC Sgt. John Peck was awarded the Purple Heart on two occasions; first for serious injuries sustained in Iraq, and again when he was catastrophically wounded in Afghanistan. He suffered a traumatic brain injury when an IED exploded underneath his truck in Iraq in 2007, leaving him with a lengthy recovery period. Eventually well enough to return to the job he loved, John re-enlisted in the Marine Corps and found himself back in combat.

In the latter incident, in May of 2010, an IED explosion resulted in the loss of both of Sgt. Peck’s legs and one of his arms. Infection led to the amputation of his remaining arm, making him the third surviving quadruple-amputee from the Iraq and Afghanistan wars.

Sgt. Peck, who received a smart home in November of 2012 in Fredericksburg, Va., aspires to fulfill a childhood dream of becoming a chef and to eventually own a restaurant.